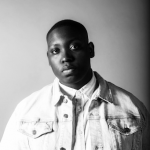 Chicago-raised rapper/singer Chronicle started writing and producing songs in high school but soon diverted his attention to a career in TV and Film. As a man of commitment, this even included dropping out during his first semester at Harold Washington college to completely refocus his efforts. Since then, Chronicle has ventured back into music with the release of two EPs: ‘I’m Good For It’, and ‘I Think it Means More to Me’.  He also dropped the warmly received debut album ‘Saturday’ in December of 2019, which features Deem Spencer. Now a Los Angeles local, Chronicle continues to audition for TV and Film while gearing up for a follow up studio album, set to release January 1st, 2021.

Chronicle made his beat for his single ‘Sorbet’ before he had any type of song written. It reminded him of sherbet, so when he started writing the song it felt natural to start in a brighter place before he turned the tides and took it in the complete opposite direction – just like when you start eating junk food you have this marvelous delight which is nothing but beautiful, but as you continue taking spoonfuls you quickly realize there’s no way to preserve it without sucking out the enjoyment simultaneously. The song addresses that through and through… that the beauty in most things requires a certain amount of darkness to be a balancing part of its DNA.

The song also contains themes that affect most people – insecurity, abuse of capitalism and depression. In his view, westerners are lucky to live in societies where the strife which arose from those things is an increasingly talked about issue. Chronicle is a musician, a rapper, and a force to be reckoned with.