Noé breaks new ground with the release of “La Fève,” the fourth single off her forthcoming i by noé EP. Despite her original roots planted firmly in the Aix-en-Provence of France, the LA-based artist has never released a song composed or delivered in her native tongue. In fact, the new release is only the second song Noé has ever written in French. Fortunately, Noé broke past the barriers that had previously kept her from doing so – because “La Fève” is a winsomely delivered and enchantingly received record that certainly deserves a place in the spotlight. Co-written by Hannah Epperson and produced by STINT, Noé’s latest draws inspiration from a childhood tradition that, in short, involves cake, a small figurine and the crowning of a king or queen. “La Fève” details the singer’s desire for attention and approval, juxtaposing this craving with the dissatisfaction of receiving it unless it has been rightfully earned. The praise means little if one does not feel they deserve it – the song dances with self-love and self-approval as much as it alludes to the approval of others.

Of course, I don’t speak the language. But this is one of the characteristics of “La Fève” that makes the song so special – the music and the energy present throughout transcends any language barrier. Simply by watching and actively listening, Noé’s audience is able to pick up on, feel and experience the inner and emotional dissonance.

In addition to the new video, which highlights Noé’s quirky personality, Hxppy Thxxghts is happy to share an exclusive interview with the songstress. Noé speaks on her evolution as an artist, her creative process, the upcoming EP and more. You can watch “La Fève” and read our interview with Noé below. 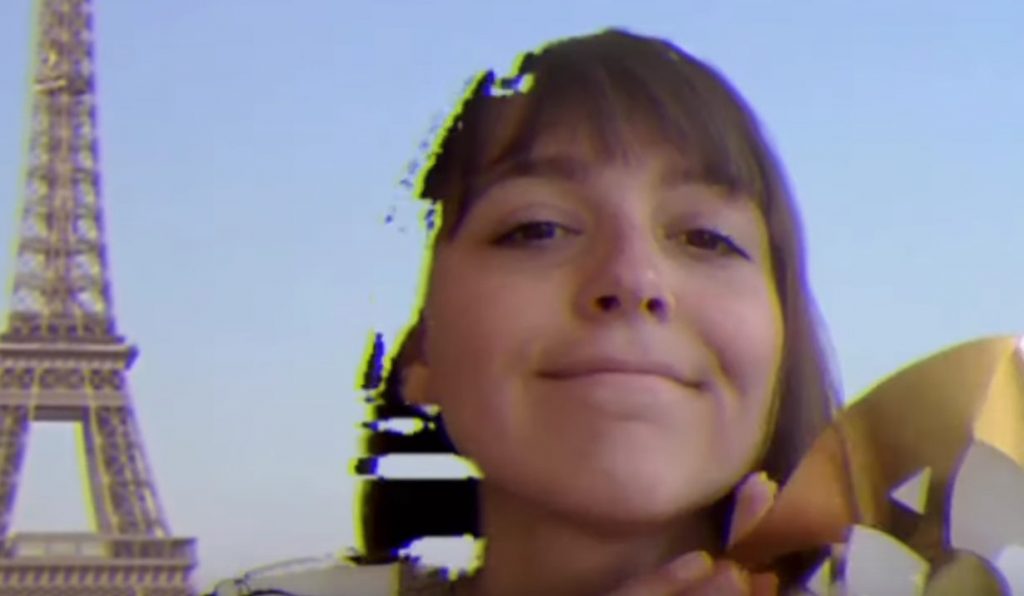 While the i by noé singles may be your highest profile – and best – releases to date, these aren’t the first pieces of music you’ve made available to the public. However, I noticed your previous work has a much stronger electronic foundation, whereas your music as of late is a finely tuned blend of pop and R&B. What inspired or influenced your sonic evolution?

I think part of what influenced my sonic evolution is me finally not being afraid of liking what I like, and not being so concerned with fitting into a mold. I used to call some of my favorite artists my “guilty pleasures” because they weren’t what was trending and none of my friends really liked them. Honestly, I think I felt embarrassed, because I liked such indie sad music. But with time I gained confidence and realized there was no point in feeling guilty. Once I took that step, I think I allowed a lot more of the music I truly loved to influence me, instead of forcing inspiration from what I thought was “current.” Now I let everything and anything that makes me feel inspire me, even when it comes from unexpected places.

Each release off the upcoming EP thus far has been notable for the personal nature of the records, albeit in differing ways from track to track. Wrapped up in your wondrous storytelling is bits and pieces of your own story. That being said, who is Noé and what does the artistic moniker represent to you as a person?

Noé is more than my creative outlet. Noé is me, being as honest as I can be. I really don’t differentiate my artistic moniker from myself as a person. The only thing I would say is that no matter how honest I am through “Noé”, there is only so much a few songs, visuals and social media can show about me and my personality.

Can you offer some insight into the creative process and artistic vision that goes into the creation of your music videos? In their own ways, they have all been so aesthetically pleasing and really work to capture the essence of the song attached to them. Do you come up with the concepts or is it a team driven effort?

It definitely varies – I love when it’s more of team driven effort. I think it’s beautiful and so much fun when multiple creatives get together to collaborate and share ideas or visions. Sometimes I can get pretty stuck in my own vision because I’ve been thinking about it for so long and can’t see things any other way, but it makes it harder to achieve because no one is in my head and sees the things I see. So I definitely like it better when everyone is involved from the start. That way the ideas bounce around, grow and develop in everyone’s heads at the same time, and you get the best of everyone’s brains and talents! And you get to have fun while doing so!

“Pity Party” and “Puzzles” were littered with tongue-in-cheek self-depreciation. Is it important for you to be able to poke fun at yourself, to laugh at some of the choices or decisions you make/have made? And then, in turn, flip that humorous outlook into something as beautiful as both those records are?

Yes, it’s important to me. But more so I think self-deprecation comes really naturally to me and is part of my personality. I’m always making fun of myself because I’m not oblivious to the patterns I find myself stuck in and the bad decisions I make. I’m very well aware. And I think it’s important not to take yourself so seriously all the time.

On the other hand, “Color” left the self-depreciation at the door, instead serving as an empowering anthem dedicated to self-love and finding light amongst the darkness of depression and anxiety. What made you decide to compose an ode to your personal trials with emotional well-being?

I honestly don’t think it was ever a conscious decision. I think it just happened. I was having a pretty hard time when I first moved to LA, and went through some rough patches mentally. I wrote that song when things started to get better, because I was paranoid I might fall back into it at anytime. I was so terrified of waking up one morning and being in a state of numbness again. I couldn’t really enjoy the “good” that I was feeling because I felt like it was only temporary. So “Color” came when I needed it most – at a time when I really needed to feel in control, especially of my mental health.

You’ve said you’d rather leave the storyline featured in the “Color” video up to interpretation – we see you playing multiple characters, burying items, etc. Is there any chance you want to shed some light on the meaning behind the ambiguous scenes and perhaps explain what the story taking place is all about?

Sure! So basically there are two characters: the protagonist and the stalker wearing a wig. The stalker takes videos of the protagonist, manifested through the VHS effected shots. She later watches the films she took of the protagonist. The deeper meaning is that the stalker character is actually an embodiment of depression, and how it is omnipresent. No matter where you are, or what you are doing, even if you are feeling fine, depression is always watching. I’d still leave the burying of the tapes up to interpretation, because honestly my own interpretation varies depending my mood. Is she hiding the tapes only to make more or is she done with the stalking? Is depression a vicious cycle or has the protagonist overcome it? I think it’s whatever the audience wants it to be.

Of course, all three singles – “Pity Party”, “Puzzles” & “Color” – will find life on your forthcoming EP. Do you have a specific release date in mind or a time frame you’re aiming for?

Shooting for the end of May!

In regards to the musical direction of i by noé, will the EP include any features? And who are some of the artists responsible for production on the project?

No features on this EP, but hopefully on whatever comes next! And only a handful of talents produced and wrote on this project with me. I like to keep my collaborators limited to a few people whom I trust. I was truly so lucky to have worked with and found a safe space in Matt Parad, Jerry Folk, Stint, Hannah Epperson and Jason Hahs.

Should we be expecting more self-depreciation, more empowering vibes or a balanced spectrum?

A little bit of both!

Any plans to release more singles or videos prior to dropping the EP?

Releasing 2 more songs before the EP! I actually shot a little last minute DIY lyric video in my living room for the latest release, “La Fève.” I hope you’ll like it! Other than that, you can maybe expect another visual. 😉

I saw on your Instagram you’ve been sharing some quick acoustic covers, most recently taking on Noah Kahan’s “Mess.” I’m a sucker for a good cover, especially when it’s stripped back to just an artist and a guitar. What are the chances we see you release any full covers, complete with live visuals?

No plans to do so as of right now but maybe someday!

Most importantly – how’s life? On all levels – physically, mentally, emotionally, spiritually – how are you doing?

I’m doing great, thank you. Music is keeping me busy busy which I love. I wouldn’t have it any other way. LA has grown on me 🙂 So grateful for the positive feedback the new music has been getting, really hope you’ll love i by noé! And thank you so much for all of your support, truly appreciate it <3 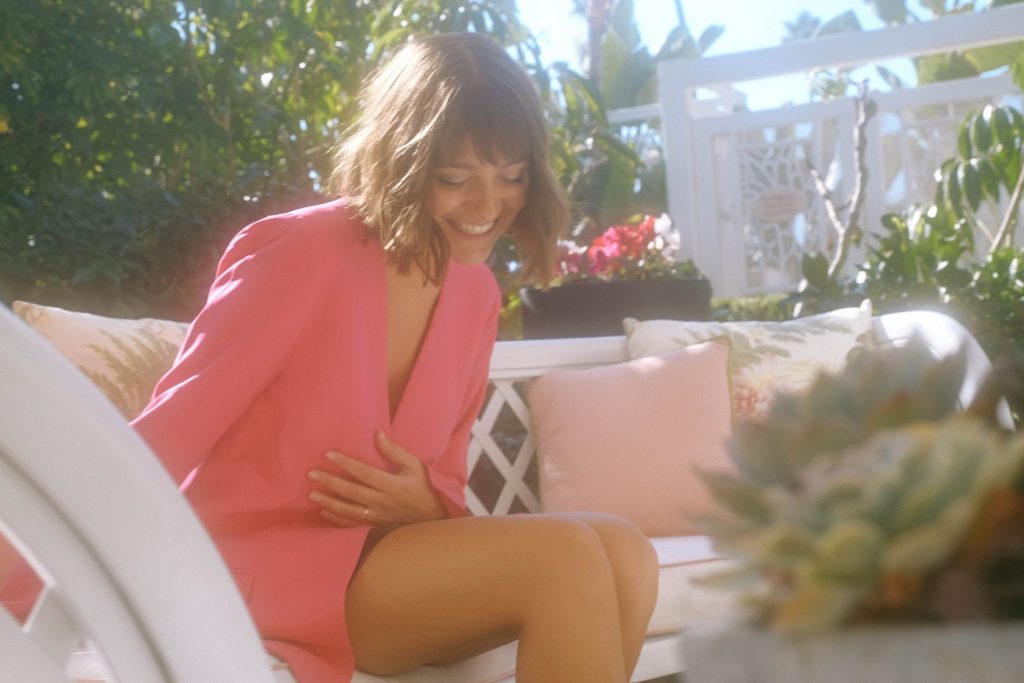 Zachary Humphrey conducts interviews and writes for Hxppy Thxxghts. His honest and personal approach to people and music is the basis for his writing style. Zach also likes trees and wrestling. Please go into your profile (yup, just click the link) and edit this when you get a chance, Zach. I just wanted to see how it would look on the author page.